Nature has always inspired scientists over the years. Now, there is a big buzz about sustainability and carbon zero technological platforms to build a safer and healthier environment for future generations. Chemists generally employ conventional processes (thermal or catalytic activation) for any kind of functional transformation in organic synthesis.

There is an urgent need to make chemical conversions greener, safer and environment-friendly. Photochemistry and especially photocatalysis provide a suitable alternative to traditional approaches: a disruptive and transformative platform learned from nature of harnessing light to thermal energy, for instance, vitamin D and photosynthesis processes.

The implementation of any new technology hinges on its versatility, modularity, scalability, safety and sustainability. Early perceptions on photochemistry, however, were to overlook and avoid it because of the intractable challenges of reproducibility, robustness and scalability – an attenuation effect of photon transport. 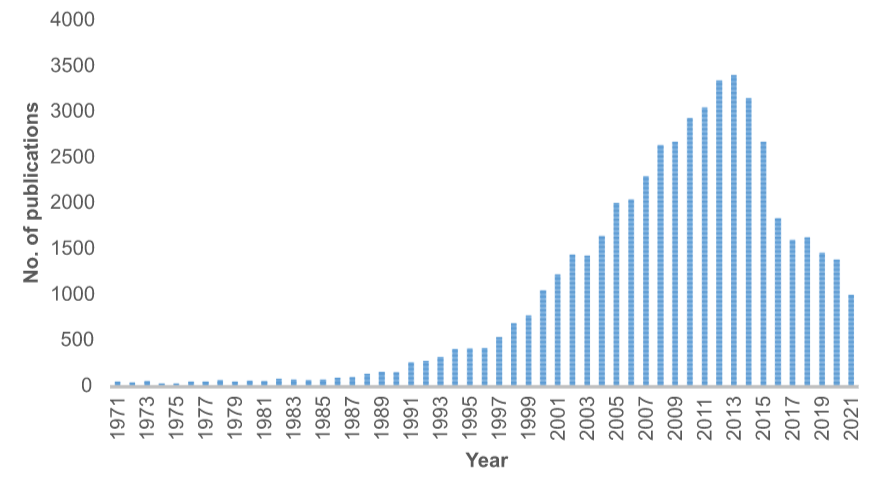 A huge surge has been witnessed in the last few decades (Figure 1), along with increased knowledge of organic and organometallic species, and their distinct properties in converting light to chemical energy for new chemical bond integrations. Generally, a photoredox catalysis (PC) process is established, wherein a single electron transfer (SET) between the excited state of a photocatalyst and organic substrate gives rise to highly reactive species, yielding unique products.

To make any photochemical process viable its fundamental concerns – the photon source, the reaction medium and the type of vessel – need to be addressed. UV-induced photochemistry is well reported in literature via [2+2] cycloadditions and Norrish type reactions arising from homolytic bond cleavage.

These forms of radiation have limitations on selectivity and tolerability owing to the high associated energy and broad wavelength range. The deployment of appropriate wavelength filters, such as perfluoroalkoxyalkanes (PFAs), perfluoroethylenepropylen (FEP), quartz, pyrex and corex, and light sources with a narrow spectral range, is therefore preferred.

LED lights have circumvented some of the issues but are plagued with the inherent problem of low intensity and lifetime stability. Efforts are being made to develop high performance LEDs stemming from sapphire technology, so as to produce highly efficient lights with narrow spectral ranges.

There is always a quest to conduct photochemical reactions in the visible region for milder reaction conditions, eco-friendliness, and reliability. Interestingly, the issue is addressed through the usage of PCs, their propensity to harness light energy, getting excited to reactive species (Figure 2) and manoeuvering electron mobility by the redox potential of reaction media to construct new chemical bonds via heat transfer, isomerisation, degradation, photosensitisation, reduction and oxidation.

Most of the commonly employed visible photocatalysts are polypyridyl complexes of ruthenium and iridium (Figure 2). These complexes provide a unique proposition, with a lower energy of ligand-centered π* orbital in comparison to the metal centered eg orbital. This has benefitted both organic and semiconductor photocatalysis. 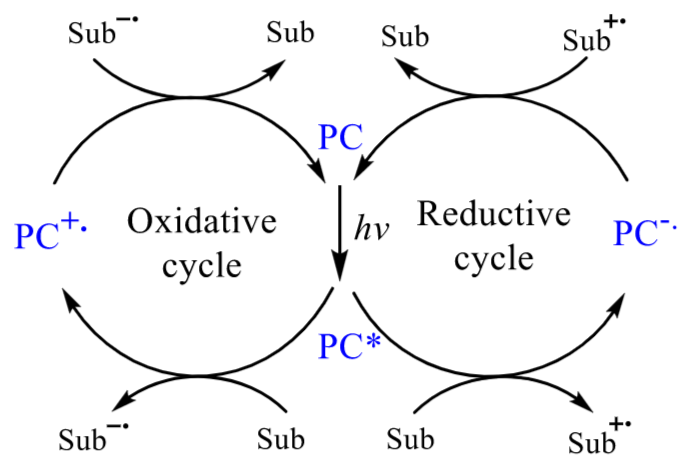 The most promising influence of visible photoredox catalysis is on exceptional bond formations like C(sp3)-C(sp3), C(sp3)-C(sp2) couplings and so on, that are not amenable under conventional conditions, and its ability to operate in redox neutral conditions. Various organic transformations, including oxidation, reductions, cyclisations, dehalogenations, cycloadditions, C-H arylations, trifluoromethylation and decarboxylative couplings, have been investigated to establish its versatility and diversity.

New advances in PCs with ‘dual catalysis’ or metallaphotoredox catalysis by pioneering contribution of MacMillan, Doyle and others in cross-coupling reactions have been reported.5 These successful transformations have made PCs a preferred tool for late-stage functionalisation on advanced drug-like molecules for building focused libraries and guiding SPR modifications to address ADME-tox properties.

Despite the tremendous advances in this field, the chemical industry is still conservative in assimilating this technology for scale-up and in industrial settings. However, advanced photoreactors (parallel photoscreening and narrow wavelength platforms) and process intensification methods (i.e. photo-flow reactors) are creating new prospects for PC technology acquisition at commercial scales to make it amenable for process efficiency and safety (Figure 3). 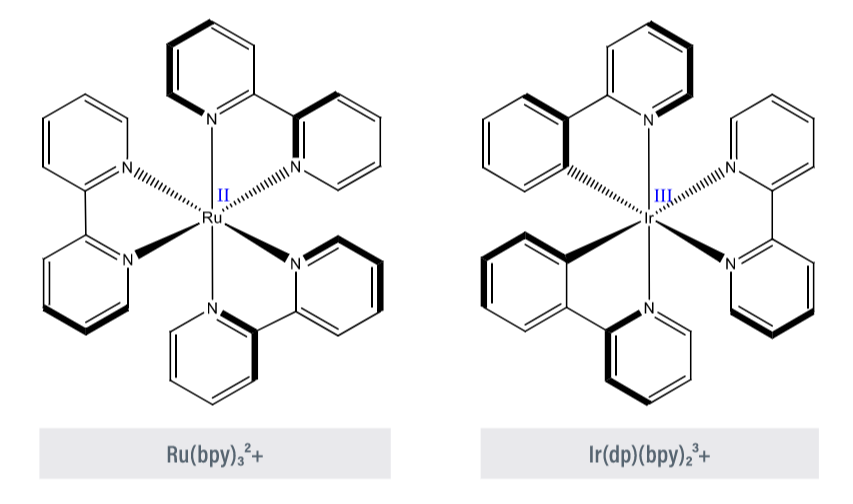 Another key issue is the availability of precious rare-earth metals like ruthenium and iridium, which are costly and limited in the Earth’s crust, and could be subject to supply chain disruption in the future. Nevertheless, the systematic development of organic PCs with computer-aided design is paving the way for greater resilience and effectiveness in PCs.

Photo-catalysis has expanded its horizon in chemical biology applications as well, for instance:

The MacMillan group has expanded the applicability and potential of iridium photocatalysis through Dexter energy transfer for carbene generation, and subsequent insertion for protein mapping in cellular microenvironment.11

Other businesses getting benefits from this technology are the material science, water treatment, polymer and solar cell industries. There is a huge opportunity available in integrating photochemistry and electrochemistry. Both are regarded as ‘green’ technologies and participate in oxidative and reductive cycles.

Electrophotochemistry, a concept envisioned by Moutet and Reverdy and demonstrated by Rusling, needs expansion to broaden the scope of reaction paradigm to solve daunting synthetic problems.12,13 Recent reports by Stahl and Wang in merging photochemistry and electrochemistry is a positive step in this direction and will expand the scope of photoredox catalysis.14

The increase utility of photoredox catalysis will augment energy conservation, atom economy and waste management efforts. The use of solar energy to drive chemical transformations could be a huge breakthrough in pharmaceutical, agro and fine chemical industry for sustainability and cost efficiency, making it a perfect partner in greener chemistry. More investigation and exploration are required to emulate the functioning of plant leaves, an enormous ubiquitous photoreactors in nature.

Learn more about our end-to-end capabilities

We use cookies on our website to give you the most relevant experience by remembering your preferences and repeat visits. By clicking “Accept”, you consent to the use of ALL the cookies.
Cookie SettingsAccept
Manage consent

This website uses cookies to improve your experience while you navigate through the website. Out of these, the cookies that are categorized as necessary are stored on your browser as they are essential for the working of basic functionalities of the website. We also use third-party cookies that help us analyze and understand how you use this website. These cookies will be stored in your browser only with your consent. You also have the option to opt-out of these cookies. But opting out of some of these cookies may affect your browsing experience.
Necessary Always Enabled
Necessary cookies are absolutely essential for the website to function properly. This category only includes cookies that ensures basic functionalities and security features of the website. These cookies do not store any personal information.
Non-necessary
Any cookies that may not be particularly necessary for the website to function and is used specifically to collect user personal data via analytics, ads, other embedded contents are termed as non-necessary cookies. It is mandatory to procure user consent prior to running these cookies on your website.
SAVE & ACCEPT